When we at First Presbyterian Church of Omak began our denominational discernment process (you can see an overview of our process here), we were overwhelmed at the task before us.  The commission created by the Session quickly settled on doing evidence-based discernment.  We would, whenever and however possible, choose to seek hard evidence for our decisions.  Little did we know that this course of action would create a large number of documents that, quite honestly, became unwieldy in practice.  Our hope is to make your and your congregation's discernment easier with this handy guide. 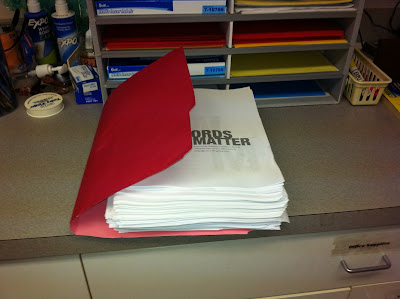 I (Pastor Bill) have had a few requests, mostly from other pastors, to get a look at what has come to be known as "The Folder" of information concerning the Presbyterian Church (USA).  Oh, you don't know about that folder.  Well let me give you a visual.  The folder is, conservatively, 3 inches thick and contains dozens of documents.  I am somewhat perplexed to admit that I have read and/or reviewed everything in the folder.  No wonder I feel so tired all the time.
What follows is an annotated list of documents in the folder that you can find with a simple click of the mouse.  Those who have requested a copy of the folder will, I hope, I understand given this list why we have been reluctant to send it out.  Frankly, it would just be too much time and work to do so.  So please use the following links to begin building a folder of your own.
I suppose reports of various other congregations who have gone through this process could be appended to this long list of resources (and some of these are indeed part of our monstrous folder).  That being said, the items listed above should keep any commission humming along for quite some time.  For those interested, you can read our commission's final report here.  Please feel free to use any or all of this report in your own (as we borrowed from others who had gone before us with similar permission).
My intent here is not to create dissension in the congregation, but to properly inform the congregation and the Session.  After our evidence-based investigation of the PC(USA) we decided it was prudent and proper for us to seek dismissal.  I hope, gentle reader, that you will approach this process of deep discernment with prayer and study and be led by the Holy Spirit to the place God is calling you to be.
Posted by Pastor Bill at 4:00 PM